Another Massive US Factory Torched in the Middle of the Night! Another Massive US Factory Torched in the Middle of the Night!

There has been another suspicious fire in the nation, and this one took one of the largest egg factories in America.

The egg factory was torched and it is just the latest in a long series of fires set to food manufacturing facilities all over the nation.

Seriously, what is going on?

How in the world can anyone think that this is just a coincidence?

A Wright County egg producer is evaluating the damage left behind from a Saturday night fire. A Forsman Farms spokesperson said they do not have a firm number yet but he estimates at least tens of thousands of chickens were killed. https://t.co/JPkqaQqO6Y @kare11 pic.twitter.com/51F8gE4oea

Here are some details concerning this recent fire at a Farm in Howard Lake, Minnesota.

A barn that housed tens of thousands of chickens on Forsman Farm in Howard Lake, Minnesota, one of the nation’s largest egg producers, was set aflame late Saturday night.

According to Forsman Farms, which provides more than three million eggs to the largest retailers in the country, the cause of the fire remains a mystery as investigators evaluate the scene to determine how the barn was set ablaze.

This spells bad news for the egg supply. Not only was present inventory or eggs destroyed, but the animals used to produce new stock were also destroyed as a result of this fire. As anyone who’s worked on a farm knows, chickens take time. It’s a massive blow to an already fragile food supply chain.

“Overnight, a fire destroyed one of our barns at our Howard Lake farm. No one was injured and we are grateful that first responders were quickly on the scene to put out the fire. Unfortunately, chickens were lost because of the fire. We are evaluating the extent of the damage – which appears to be confined to a single structure – as well as investigating the cause of the fire,” a Forsman Farms told Minnesota’s local CBS affiliate.

Law enforcement estimates that over 200,000 chickens were killed. The effects of this are going to be felt as the farm was responsible for producing nearly 3 million eggs DAILY. Keep in mind that this was not the first fire that’s happened on an egg facility recently as this Twitter user points out.

🐓Forsman Farms is a 4th generation farm that was started in 1918.

🥚The farm sells more than three million eggs a day to some of the nation’s largest retailers. pic.twitter.com/bBLIZyH3ab

You do not have to be completely well-versed in everything that is happening politically in our country to know that we are already facing a food shortage.

The shelves in stores across the nation are already seeing bare shelves from pop tarts to bread, and it isn’t going to get any better.

However, Biden and his team have been passively aggressively stating that things are not as bad as Americans are making it out to be. “Just switch your brand of milk” or “Just change the type of shampoo you use” are common statements from the Left on podiums and on social media.

The accusation they are making is that things aren’t that bad, Americans, especially conservative ones are just spoiled.

So are mothers just “spoiled” cause they cannot feed their babies?

These are not optional things, we are seeing a shortage of things that are essential to survival.

The issue is that the administration knew months ago that this was going to happen. And yet because of inaction, we are now seeing mothers and babies pay the price.

Remember: the Biden administration knew about this crisis since LAST YEAR but Joe Biden failed to act for MONTHS

Many of our readers know, that there have been an unprecedented high number of food manufacturing facilities that have been mysteriously destroyed over the last year. Here is just a small sampling.

Here’s one from just a few days ago.

This one in March was especially brutal, wiping out a huge chunk of supply to an entire portion of the country.

Well is this going to be the new scare tactic? Are Warehouse fires going to fuel food shortages? "Just asking " pic.twitter.com/OKFRF0WafT

If you aren't paying attention you have probably missed all the food processing plants or warehouse fires lately. Over a dozen in the last month I suppose that it's just a coincidence though huh. Remember the Gov said we will see a food shortage don't get caught slippin pic.twitter.com/Tf9VKkvF2V

As this Tweet states, more than a dozen of these fires have occurred in just the last few months. We’ve reported on this for months now. When you put all the pieces together, it’s unlikely that these fires and damages to our food manufacturing infrastructure are by chance. Facilities like these have to adhere to strict standards and OSHA regulations for the sole purpose of avoiding situations like these.

Nothing can be confirmed as of yet, but it seems very interesting that all of these things are driving Americans into food insecurity at the same time that inflation is eating away at their dwindling resources. Could it be that uninformed Americans are being backed into a corner so they will accept the first raw deal the Left offers them? Hopefully, we won’t have to find out. 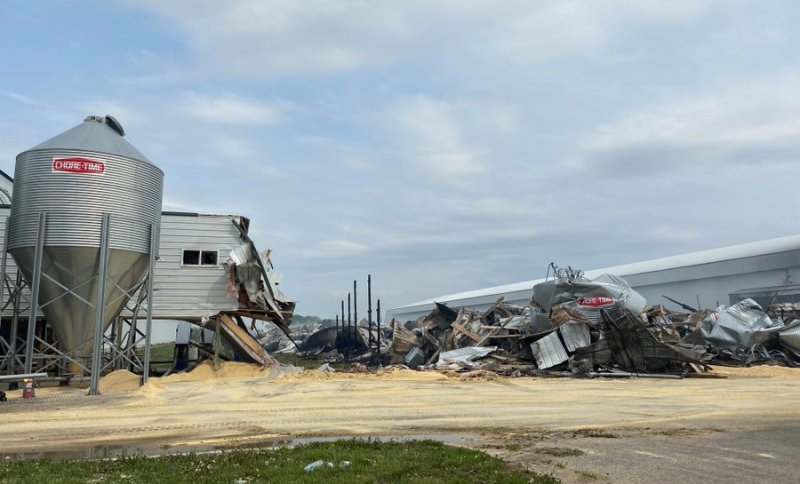