The authorities are ramping up the pressure even more to get us to comply with what they want us to do “so that they can keep us safe.”

How has the CDC guidance been working out? It’s obvious from this graph (which you won’t see on CNN):

So when something isn’t working, what do you do? Sane people listen would start to listen to qualified people with a different point of view. Insane people keep doing the same stuff over and over again and expect a different result.

In case you haven’t figured it out, we’re in the insanity category. It’s how we roll.

Naturally, the authorities will never blame the fact that cases are out of control on their own dumb advice. They are going to blame the unvaccinated and anyone who isn’t complying with their advice.

So they will double down on their mandates and make it even harder for critical thinkers to live.

So things are going to get worse. A lot worse.

Check out the latest news headlines…

A report in the German newspaper Die Welt suggests that the government there is considering taking action to shut down messaging app Telegram.

Because people opposed to COVID restrictions and lockdowns are using it to organize protests and share information! This is unacceptable to the German government. They require blind obedience.

Washington state wants to put you in jail for a year if you don’t comply with their health orders, including requiring you to be vaccinated

Look at what’s happening in Washington state in America right now as an example.

Under the RCWs cited “A person who violates or fails to comply with a health order issued under RCW 70.24.024 is guilty of a gross misdemeanor punishable by confinement until the order has been complied with or terminated, up to a maximum period of three hundred sixty-four days.”

So if they want you to take a vaccine, any vaccine, you better comply or they will put you in jail. They can then repeat that again and again. So basically, you better take the vaccine they want to inject in you, or you will spend the rest of your life in jail.

That’s not a violation of the Nuremberg Code is it? (of course it is, but what do they care).

Even more spectacular is what just went into place today January 15 in Washington DC:

Unvaccinated and want to go to the bathroom? Good luck with that! You have to hold it until you get to Virginia.

However, hotels are not included in the mandate, and federal government buildings fall outside the city’s jurisdiction so that’s a relief (for the moment).

You can still go to grocery stores, pharmacies, and airports. But how long will that last? Another month?

San Jose forces all city employees to be vaccinated

More Nuremberg Code violations. San Jose, CA is requiring all 7,000 employees to be triple-vaccinated or lose their job. Wow. Pfizer and Moderna must love that!

And if you want to attend any large indoor event, you must show proof of either a booster shot or a negative COVID test before you can enter.

The policies were unanimously approved by the City Council.

The Mayor proclaimed that San Jose is leading the US with this measure.

Does he understand that they have to be vaccinated every 60 days as clearly shown by the Denmark study?

If you think the world is moving in the right direction, you don’t need to do anything. Sit back and relax.

If you are unhappy with how things are going, please subscribe to my newsletter and post this article to your social networks.

If you are near Washington DC, join our rally on Sunday, January 23. Or just make a donation. We’re expecting around 200,000 people. 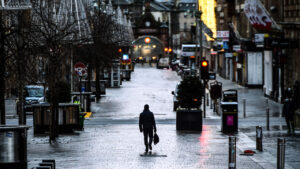