3000 South Australian health workers protest. These are their words, not mine. 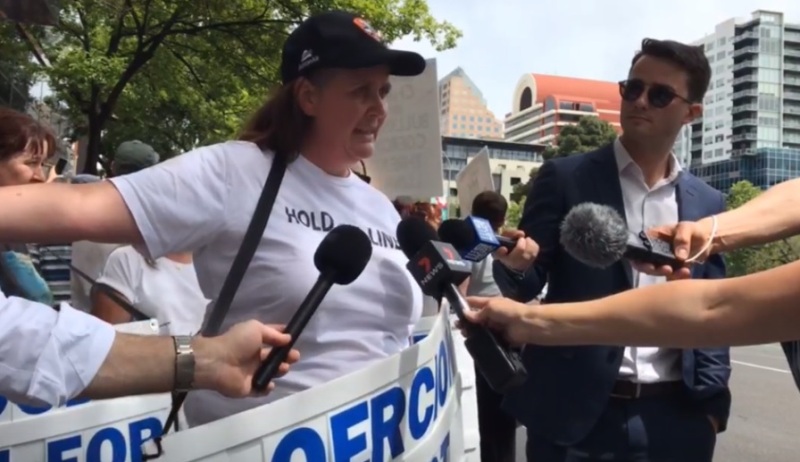 Leon De Lisle
These people have been there for us through wars, famine, fires and now the pandemic, they have given them our all and this is how they are rewarded. To the people of the world, don’t let them down, they were there for you now it’s your turn wether you agree with the jab or not support these people, please.

Ray Ellis
Good Work. We absolutely need more to WAKE UP and STAND UP for OUR Rights.
This Lady and her supporters and others who have decided “Enough IS Enough” need to be recognised as HEROS just as we did with the Fire Fighters through the last horrific Bush Fire season.
Thank You SO MUCH.

(Dr) Maureen B. Roberts
What a brave and gutsy lady, penalised for simply speaking the truth and wanting to help sick folk. I know where she’s coming from – I was persecuted by mainstream psychiatry and the police – for speaking the truth about the forced drugging (with toxic drugs) of folk labelled as ‘mentally ill’ (who are, in my long experience, often anything but). The same game is at work with this Covid mandate: drug companies profiteering from forcibly making people sick – and spreading lies (with Govt and media aid) about the need for ‘treatment’ – when all along safer, more humane, non-coercive alternatives were/are available. It’s shameful, bordering on evil. And shame on the media for not telling the truth but instead now being a mouthpiece for Govt and drug company propaganda. Truth will out, but sadly, many more will die from the vax, or from suicide in the process.

Maureen Roberts
Basically, I was a lone wolf with no colleagues. As a therapist, I worked to demedicalise the normal life problems being drugged and labelled as ‘illnesses’. For the person mentioning ‘not a real doctor’, training in my field of soul-centred psychiatry is even more demanding than medical school and those of us with a PhD are legally ‘doctors’.

IGNOUL
true indeed, the world elite mafia wants to push the complete world population, after murdering billions of them in a genocide, into a totalitarian communist dictatorship with only one government to control and enslave the people that survive. As a Belgian, living in the Philippines i am shocked to see and read how far that situation has already evolved in Australia and New Zealand. Stand up people and do NEVER accept this madness, which is 1000 times more worse than the holocaust, created by Hitler and dr. Mengele.

Peter Waugh
You have my attention! Totally agree with your thoughts. Our Countries Moral Compass is totally misaligned!